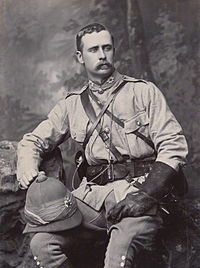 Augustus Paulet, 15th Marquess of Winchester, was born in 1858. He was educated at Eton and King’s College, London, and succeeded his father to the peerage in 1887. As a major in the Coldstream Guards, he served in the Second Boer War and was killed at Magersfontein, South Africa, on the 11th December 1899, in a battle where the defending Boer force defeated the advancing British force. Lord Winchester was mentioned in the despatch from Lord Methuen describing the battle, as a man who “displayed almost reckless courage”.

His will stipulated that ‘My funeral should be as simple and inexpensive as possible and my body should be cremated and that my ashes be placed in the Family Vault at Amport’. In the event, the funeral was one of the most spectacular events ever held in Amport but I haven’t yet been able to find the Paulet Family Vault.

Lord Winchester had signed his will in London on the 29th September 1899, just 72 days before he was killed in South Africa. Probate was granted on the 16th March 1900 and there were many sections that related to his principal beneficiary, his brother, Henry Paulet, who became the 16th Marquess. Some of these sections put money into trusts that took years to resolve by legal actions at the High Court.

The will made many bequests for large sums to his various relatives and friends but, as a good landlord, he didn’t forget his workmen and servants. The table below shows the recipients and the sums they received:

These sums, when looked at the spending power compared to today’s prices, seem enormous. For the kitchen-maid, Ellen Guntrip, to inherit £250 must have seemed a huge windfall. The equivalent today is about £30,000 and property was much cheaper then: Bridge Cottage (close to Amport Green) sold for £90 in 1923. A kitchen-maid could become a person of property as a result of this legacy!